(please right click on the link below to open the suggested musical accompaniment to this evening’s Independence Day gathering.   May I have one of your sparklers?  Thank you.)

Nothing, freedom included, can exist in a vacuum.

Figured that three people around the world, as well as their stories, might add substance to Independence Day by adding air to the vacuum and shooting the vacuum in the head with both barrels.   Those three people are Haitham Maleh of Syria, Gendhun Choekyi Nyima of Tibet, and Farzad Kamangar of heaven. 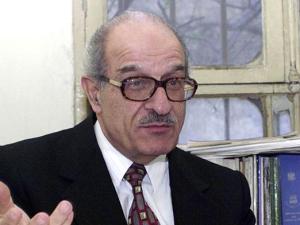 Ah, Syria.   Iran’s primary defense against Israel.  Within the last week, Syria allowed Hezbollah to set up their own Scud missile base within Syria in order to maneuver around those pesky rules of not being allowed to actually arm Lebanon.  If Hitler had any kin alive, odds are that Syria would build them some ovens and invite them over from Austria for the summer.

Last week, Syria sentenced Haitham Maleh to three years in prison for the madcap crime of……..wait for it……..weakening national morale.    This is the third go round in prison for the seventy-nine year lawyer and human rights activist who spent most of the 1980’s in prison and is banned from leaving Syria.   Ever.

Mr. Maleh clearly deserved that three year prison sentence.   He was constantly criticizing the Ba’ath government and no one wants to get criticized all the time.   My parents criticized me unmercifully as a child:  always after me to clean up my room.  Sometimes I pass out when I see a can of Pledge or a vacuum.   Criticism hurts and the pain lasts for years.  I am going to have to side with the Ba’ath party.

Am also going to give the Ba’ath party bonus points for ingenuity for passing the law in 1963 that outlaws any and all opposition to…..wait for it….. the Ba’ath party.   Brilliant!   Even more brilliant is that when someone like Mr. Maleh speaks up for freedom of speech, freedom of assembly or anything else we take for granted, they get thrown in jail for my new favorite crime.

Weakening national morale!  Sure hope Mr. Maleh does not lose his Guezen medal while he is imprisoned for the next three years.   That would be a shame.

Was very cool of the IOC to provide China a red carpet to the world stage, despite the air quality, slave labor, and the fact China stole the future Dalai Lama (and current Panchen Lama) thirteen years before the Olympics.   And are still holding him and his family.

On May 14, 1995, His Holiness the Dalai Lama recognized a six-year-old boy from Northern Tibet, Gendhun Choekyi Nyima, as the 11th Panchen Lama of Tibet.   One week later, Gendhun Choekyi Nyima and his family disappeared from their home in Tibet.  They have not been seen or heard from since.

Seven months after his disappearance, on December 8, 1995, the Chinese government enthroned their own Panchen Lama, disregarding the choice of the Dalai Lama and the wishes of the Tibetan people.  Tibetans are forbidden to own or display photographs of the Dalai Lama.  There is a crackdown on all Dalai Lama photos in shops, restaurants, and monasteries.

On May 7, 1996, monks from Ganden Monastery, one of the largest in Tibet, demonstrated in response to this crackdown.  Soldiers fired warning shots before entering the monastery and then arrested at least 66 monks.  During the incident, three monks were shot and wounded.  Another monk reportedly died of a bullet wound several days after the incident.   The Panchen Lama is still missing and Tibetans continue to be arrested, detained, and tortured for exercising their religious beliefs.

Am going to have to side with China on this one, as I sided with Syria on the Mr. Mahel sentence.   That little kid in The Golden Child scared the crap out of me and I’m certain the kid would have killed Eddie Murphy and the rest of the characters, given enough time.   Can live on one single little leaf a day?   Levitates?

Were you China, would you want some holy figure like that kid always threatening you from your western border?  Heck no.  Gendhun Choekyi Nyima as Dali Lama could have created nuclear warheads out of doves or sparrows and BOOM………there goes China.   Tibet took over parts of China in 1640 and it could happen again.  I don’t blame the Chinese one bit for persecuting all those monks and those hater Buddhists. 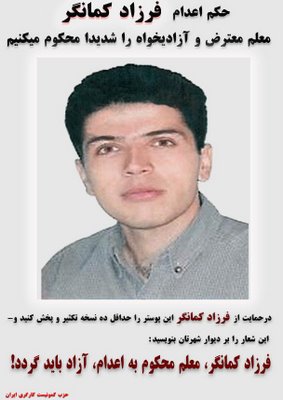 First, though, please put yourself in the shoes of the folks that cut off Mr. Kamangar’s head in May.   You faked an election a year ago, got caught, and two generations of Iranians revolted peacefully for months.   Your folks are out there with guns and billy clubs beating people in the streets and they won’t even fight back.   Major vexation there.   Then, you get busted building nuclear weapons and have the stiffest international sanctions imposed on a country since Libya back in “the day”.   You with me?  You have the general vibe?

If you are Iran, you most certainly don’t need some rabble rousing Kurdish teacher teaching  subversive things!   Especially a thirty-two year old Kurdish teacher because a thirty something teacher is going to teach their subversive rabble rousing crap for decades and decades.   Mr. Kamangar was convicted of “enmity towards God” in a five minute trial.   “Enmity towards God” is almost as awesome of a charge as “weakening national morale”, but not quite as awesome.   Both are in the top quintile of cool sounding crimes, though.

At least Iran did the right thing and executed Mr. Kamangar before his appeal was processed.   They were also wise enough to wait until after they cut off his head to tell his attorney and family that they were going to cut off his head.   Saved a lot of time on that appeal and saved a lot of needless phone talk by simply calling and asking where the family wanted the body shipped and if they preferred two boxes or everything crammed into one.

Plus, Iran executed Mr. Kamangar  on Mother’s Day and no brutal Islamic theocracy is cruel enough to tell a mom that they are going to execute her son the day before Mother’s Day.   That would be tasteless.

We are uniquely fortunate to live in a country where we can choose to call Glenn Beck an small minded, hating, non-fact checking bigot without fear of prison.    Now please, for the love of the Dalai Lama, take off those stupid shoes and massive gold hoop earrings and give me a hug.   I am sorry about your mommy and daddy.   It’s OK……you are in the safe, warm confines of the Mind of Mully now.   Toss the pumps in the box on the left and the hoops in the box on the right.    Feel better?

Thanks for joining this evening.  This is a fantastic place to live.

(Editor’s Note:   Iran did not really cut Farzad Kamangar’s head off.    They hung him.  The “one box or two” sentence lost all context if you thought they hung him.   Sorry.)

Tommy Morello’s Axis of Justice brings together musicians, fans of music, and grassroots political organizations to fight for social justice.  If you have ever felt the itch to “organize”, you’ll find some great success stories here as blueprints.   Find out more about Axis of Justice at the link below: