(Please right click on the link below to open the suggested background music to this evening’s gathering in a new browser window.   Lisa Sanders is an amazing artist…you really should right click on the link.    Close your eyes the first time through and just soak in the music.   Then….read and laugh and cry.   Thank you, Lisa Sanders, for the perfect background song.)

Since birth, have been an atrocious breaker upper.    Especially two forms of breaking up:  breaking up with significant others and terminating employees.   Each verb phrase takes an amount of courage absent in me since birth.  Have done both scores of times throughout the years and while I’d like to say they get easier with practice, they don’t.  While I’d like to say that I got better at each with practice, I haven’t.    Did a poor job breaking up with my first girlfriend in fourth grade.    Did an equally poor job of breaking up with my last girlfriend in 2009.

I’ve dated people months and years longer than I wanted to, hoping they’d get in a car wreck or perhaps move to another state so I didn’t have to say the requisite “it’s not you, it’s me”, “this is not working out”, or “I’ve actually ‘dated’ four hundred seventy three other women while you and I have been dating.”    We men tend to be cowards about breaking up with women for three primary reasons.   Reason One is we are unable to accurately and/or honestly answer the scores of rhetorical questions sure to follow the breakup.    These unanswerable questions (“then why did you say you love me?”, “then why did you sleep over last night?”, “does this mean we are not really, truly soul mates?”, “can I keep the money?”, ad infinitum)“ are exponentially more terrifying than the actual breakup because the questions can go on for days or weeks and you will most likely position yourself in front of the door while running the inquisition.    Which is why for years I have chosen to date only those who live in ranch style homes or rent places on ground floors.    Reason Two is we hate to see you cry.   Because you are very, very beautiful.

Reason Three is we men are terrified of the possibility that we may bump into you one week later on the arm of someone better looking, leaner, richer, and more well read.   Reason three accounts for ninety three percent of the reticence to break up with you.    Please keep that on the DL.   Reason Three is, of course, the most powerful.

Termination trepidation has two primary reasons in Mulliganville.    Reason One is that for the weeks leading up to terminations, would stay awake nights thinking of that person returning home to their significant other and children after our severance meeting.   Have never had a problem with explaining to a member of my team that this career adventure was a poor fit for both parties.   Have always had a problem picturing that person going home afterwards and explaining to their husband or wife that they are no longer gainfully employed.

Reason Two is no one likes to stand up and say “I was wrong”.   When you hire someone and it ends in termination, as the leader you were wrong.   Wrong about culture fit, wrong about skill set, wrong about shoe selection, wrong about musical taste, ad infinitum.    Very few like to raise their hand and say “I’m wrong”.

The talent of which I am most proud is my Doctor Doolittle like skills with animals.  Were I brighter, more adept at Chemistry, and if the twenty-eight veterinary schools in the United States reduced their admission criteria by eighty-two percent, I would be a veterinarian today.  My love of animals closely rivals my love of music, each slightly over eleven on a ten scale.  The feral cat herding and socializing skills began with Marsha, Jan, and Cindy in 1997 when they showed up, their feral mother dead, running single file through the alley behind my home….vainly trying to jump into trash dumpsters four thousand times their height.   Trapped them a week later with a smelly can of sardines, a pet carrier, and seventeen straightened out wire hangers tied to the pet carrier door.   Marsha, Jan, and Cindy lived in what is now the foster room, avoiding me like the plague for six weeks.

Cindy was the last of the three to approach me and permit the petting of the head and has remained the most aloof and independent for fourteen years.  This, of course, made me like her even more.  Made that adoption poster above and tore it up three days later when I realized I was going to keep the three morons.   Chez Mulligan had zero (0) cats at the time.   This house was once was underpopulated with cats.  Shocker.   Cindy has owned the upstairs portion of Chez Mulligan since day one and rules it with an iron fist.     She’s witnessed ninety-six percent of all business conversations held in this office since 1997, watching my conversations with bored eyes from the right.    When she gets really, really bored, Cindy will move forward a foot or two and cover up the current project.     Like this: 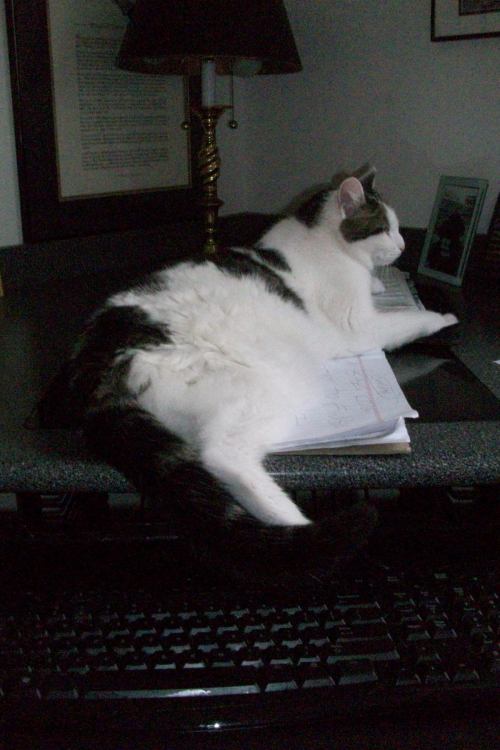 When we have guitar concerts in the living room, Cindy stays off on her own. 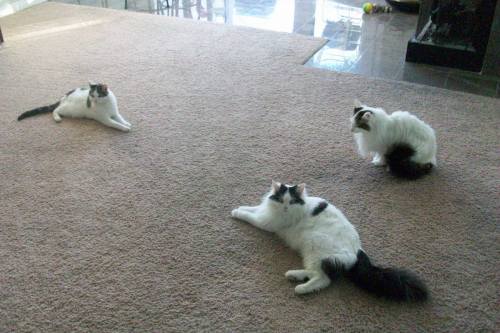 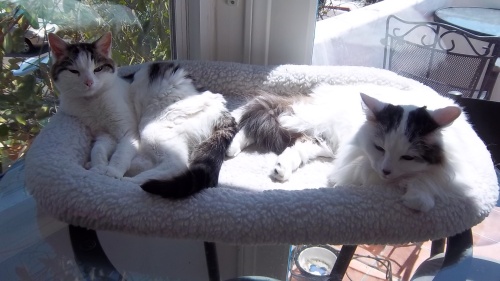 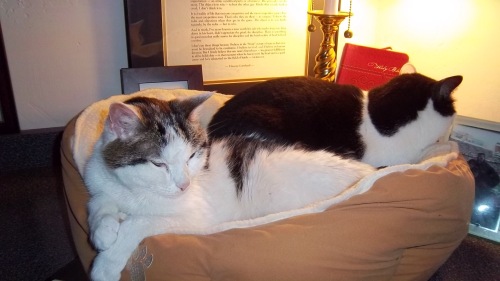 Throughout 2009, one of the rescue cats living permanently in Chez Mulligan, Sage, vigorously battled cancer.    Had I the means and had MD Anderson Cancer in Houston the ability to treat felines, would have had Sage at MD Anderson in an aggressive cancer treatment program immediately.   Sage was on his last legs by December, 2009 and ready to head to heaven.   Kept delaying the inevitable for selfish reasons, reasons similar to the ones we all use to postpone break ups and terminations.  Scheduled a vet, Dr, Freeman, to come by the house to help him along.   Dr. Freeman was scheduled to come by at precisely 3:00 p.m. on December 23, 2009.

Dr. Freeman schedules a week ahead of time.  For the seven days leading up to December 23, I couldn’t sleep wondering what it would be like to look into Sage’s eyes as he passed.    Have had plenty of dogs and cats who have moved on, but have never scheduled the visit ahead of time, had time to think about it, or made the choice to say “push the syringe plunger”.   Am not good at breaking up.  Sage helped out with the breaking up back in 2009.

The evening of December 22, Sage and I hung out in the office together, drinking Pilsner beer, listening to “Round Here” by Counting Crows, and sharing stories of the our nine years together.    At eleven p.m. I carried Sage downstairs and we went to sleep for the last time.

I awake, fully alert and ready to play, at 4:45 a.m. every day.  Weekdays, weekends…..regardless of time zone….I awake at 4:45 a.m. Cali time.   Never earlier and later only when the prior evening is particularly adventurous or strewn with chaotic fun.  Awoke December 23 at 2:47 a.m., fully awake and ready to play.   Sage was not in the bed next to me.     Jumped up, found him in the bathroom in a pile of urine, and carried him up to his cat bed in the office.  At 3:00 a.m., he took one last breath, looked into my eyes, sighed a big sigh and passed on.  Dr. Freeman was scheduled to come precisely twelve hours later and I like to think that Sage chose to leave at precisely at 3:00 a.m. so that I would not have to go through December 23 thinking about having to make the choice to help him along later that day.    Was quite thankful I did not have to make that choice December 23, 2009, thanks to Sage.

Had to make that choice today when Dr. Freeman visited to help Cindy along to join Sage.   Cindy is now in heaven fighting Sage for kitty treats.   Cindy was a marvelous companion, a solid addition to my office, and a world champion purrer. 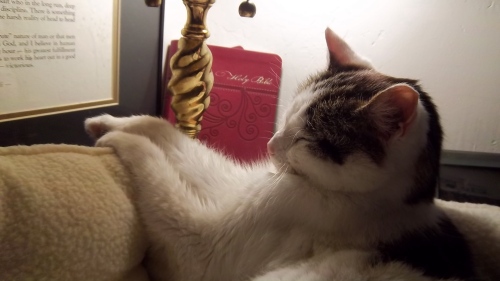 Cindy passed away in her friend Mully’s arms peacefully at 11:27 a.m. on Tuesday, May 31 in the La Jolla Blvd. bed in which she daily sunbathed.  Cindy’s favorite hobbies were watching Dan work from two feet away on his desk, meowing loudly whenever anyone called on the business phone, and kitty treats.  Cindy loved her some kitty treats.   She also had the softest fur and the loudest purr of any cat in this galaxy or any other galaxy.  No cat will ever purr as loudly or as meaningfully as Cindy.   When revved up, people three counties over could hear Cindy purr.  Cindy is survived by her sisters Jan and Marsha, her step brothers Bruiser and Deeeeeeeeeeeogie and her step sister Ceeeeeeeeeeeeatie. 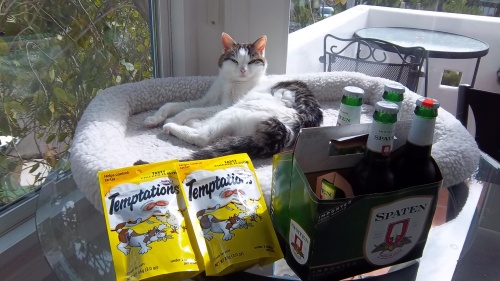 The music industry is quite perplexing.    If you chose to cue up the music suggestion above, you’re listening to an amazing singer song writer.    Had the good fortune of seeing Lisa Sanders make her magic with Steve Poltz at a coffee house in San Diego years ago.     She sang “Rainbows” and it was one of those moments when The Random smashes you into something that sticks, waiting for the right time to be your wing person.   Cindy and I sat in the office all weekend, drinking Pilsner beer, listening to “Rainbows”, and sharing stories of the last fourteen years.   All life things should be set to music for the correct emotification:  “Rainbows” was the perfect song for our last weekend together.     While listening, we each opined on how silly it is that Lisa Sanders has yet to have a platinum album, while Katy Perry has a recording contract.   Thank you for the perfect song for the occasion, Lisa Sanders.   You are quite amazing.  The music industry is quite perplexing.

Good bye, Cindy, I will miss your jet engine purr.   This Emily Dickinson is your going away card.

The stiff Heart questions was it He, that bore,

And Yesterday, or Centuries before?

The Feet, mechanical, go round

Of Ground, or Air, or Ought

This is the Hour of Lead

As Freezing persons, recollect the Snow

First …Chill …then Stupor… then the letting go.

For more about Sage, please click on the following link: