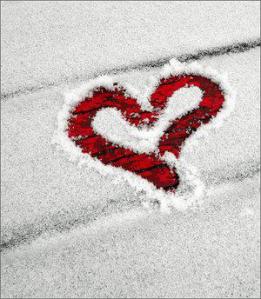 Best Experienced With:     Nick Cave and the Bad Seeds;     Into My Arms

(Please right click on the link below to open the suggested background music for this evening’s Christmas night nonsense.    A beautiful little ditty by Nick Cave.   Good slow dancing music.  Crank it up, grab your partner, and slow dance.)

Take, for example, Frosty the Snowman.   All sorts of terrifying things going on in that animated Christmas special, including Jimmy Durante’s narration voice.  Sounded as if Mr. Durante was smoking a pack of Camel fliterless between each line.  As a child, I would picture Mr. Durante passing out, face purple, from either COPD of stage 4 lung cancer in between takes on set.     You have Karen leaving her parents and jumping a freight train with Frosty so that he does not die from meltation.  “Meltation” is not a real word:   do not use “meltation” in any holiday conversations.   Really, really nasty people travel this nation by jumping freight trains…these are the people who are too poor to buy Greyhound bus tickets.  You have the cop hassling Frosty and getting up Frosty’s face simply because the cop is The Man.   No wonder Karen ran away.   You have Professor Hinkle chasing Karen and Frosty around, trying to kill Frosty while cackling; “I must get that hat back! Think nasty, think nasty, think nasty!”   Think nasty?   That’s nasty.   Frosty clearly has early senile dementia because each time the hat pops back onto his head he exclaims “Happy Birthday”.  Terrifying, but not half as terrifying as The Year Without a Santa Claus.

The ideal title for a children’s Christmas special is The Christmas That You Got Everything on Your List from Santa and Thirty-Three Extra Things That You Didn’t Even Consider.  For a seven year old, the worst title for a Christmas special is The Year Without a Santa Claus.  Since his mom loved Snow Miser better than him, Heat Miser (looking like Satan) is angry at Santa and burns stuff for the entire twenty-two minutes.   You have Vixen getting tossed into the pound by The Man in Southtown and then getting sick and close to death while waiting to get put to death at the pound.   Even at that young age we knew that seventy-two hours after an animal shows up at the pound, that animal gets the gas bath.   There you are, the seven year old you, sitting on the edge of your seat watching Jingle and Jangle screw the pooch as the clock ticks down on Vixen’s seventy-two hours and Santa remains in bed with a “cold”…really just angry that no one really believes in him.    This fits, because he doesn’t exist.   Terrifying, but not as terrifying as The Grinch Who Stole Christmas.

The Grinch Who Stole Christmas is narrated by Boris Karloff, the man who played Frankenstein and the villains in Isle of the Dead and The Body Snatchers.  Apparently Lon Chaney and Bela Lugosi had other commitments when the producers were looking for the ideal narrator for a children’s Christmas special.    The Grinch treats his doggy, Max,  in a Michael Vick like fashion and then heads down into Whoville from Mount Crumpit and steals everything in town.   There you are, the seven year old you, watching this green guy who just beat his dog senseless stealing every single present in Whoville.  That’s uplifting.   Each and every year I watched that flick as a child I would hope and pray that the Whos down in Whoville would converge on the Grinch when he roared back into town like a pack of rabid dogs, ripping him to pieces and then discarding all their wrapping paper on his still warm body.   Cindy Lou Who standing on the Grinch’s chest with a miniature Lousiville Slugger screaming: “There’s a bulb out, eh?     A bulb?   Lie to me now about my tree, pal!   Oh…you can’t, can you?   Because you’re dead now, you damn thief!” 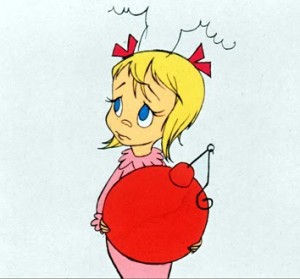 None of those have as much angst and terror as Rudolf the Red Nosed Reindeer.    First thing we see if Rudolf’s dad rejecting him six minutes after he is born and the rejection goes on and on.    I always wanted to be able to levitate as a child, but lived in fear that if I ever realized my dream of levitation, my father would pack a bunch of mud onto my nose and tie lead to my feet so that no one else would see the “real” me.   Donner was a jerk and perpetuated the myth that if you are different, you will be ostracized.  Then, Clarice’s father forbids Clarice from hanging with Rudolf because he was different, further propagating the ostracization.      That’s a fake word.   Ostracization is not a real word so do not use it.   People will laugh at you if you work “ostracization” into a holiday conversation.

What happens after Clarice’s father tells his daughter to only date the “normal” reindeer boys?   Yep.  Rudolf and the dentist elf guy and Yukon Cornelius go to the concentration camp that is the Island of Misfit Toys where we find a ton of toys that any of us as a seven year old could have fixed.    We could have emptied the jelly out of the squirt gun and filled it with water.   We could have taken the square wheels that some moron put on the train and replaced them with round wheels.   How tough would it have been to change Charlie’s name to Jack and, all these years later, none of us can figure out what the hell was wrong with the “dolly for Sue”.    That was a perfectly good doll.   Go watch Rudolf the Red Nosed Reindeer again.   Watch it over and over and over and over and over again.   I defy you to find anything wrong with that doll.

Fast forward to the end and you have an abominable snowman who had all of his teeth pulled out, a flying lion who is still flying around and stealing perfectly good toys to populate his island of “misfits”, and Mrs. Claus finally got Santa fat.   Do you remember the swing in Santa’s weight in forty-seven minutes?   Terrifying example of bulimia.   That entire Christmas special is terrifying.

Onto the holiday cards, the photo ones in particular.   Rest assured that your annual photo cards are not wasted when you send them to The LJ each year.  I watch your children grow up on the inside of the cabinet doors here in the office.   Each time I grab a book to read or lend out, I get to look at your children and that’s quite cool.    Thanks for sharing.    All twelve cabinet doors are now almost filled and if you continue to procreate, will have to get a bigger house down the road.    Here’s a sample of your cute kids and your holiday cards: 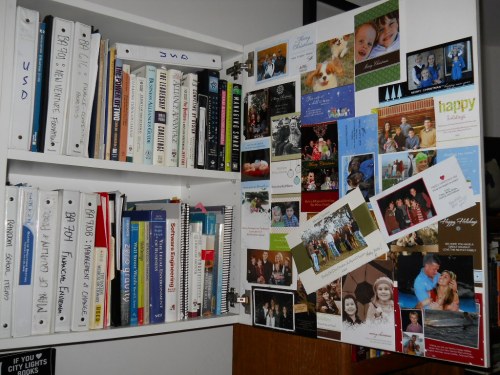 Had a brief flirtation with being a husband and for the entire period of the engagement through the end of the marriage, those vivid images disappeared.   It was Eternal Sunshine of the Spotless Mind, it was effortless, and it was quite wonderful.  With no thought or intention, those vivid, nekked memories packed themselves into a box and self sealed the lid.    That was pretty damn cool.

I guess that would be a damn fine definition of true love.  It’s a great deal of fun to watch you people in love during the holidays, walking around holding hands and giggling.   It is still utterly terrifying to watch those evil Christmas specials.

Merry Christmas, Happy Festival of Lights, & joyous whatever else you may be celebrating this week.

One response to “Expository Christmas Dialogue, A Slow Dance Tune, & The Eternal Sunshine of the Spotless Mind”