Negotiation (mind of mully board game) 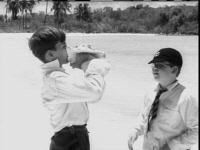 (please right click on the link below to open the suggested background music to this evening’s treatise involving the new Mind of Mully board game, market penetration strategy, and a single paragraph on the wisdom of negotiating in groups)

Welcome to the instruction manual for the Mind of Mully board game, Negotiation (trademark and patent pending).      Enjoy

First, choose one of the seven board game pieces.   Please choose the one that best suits your personality and mood at game time.

The leprechaun from Lucky Charms 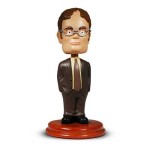 The emblem ripped from the front of an Escalade

A Care Bear (Funshine Bear to be precise)

The dog game piece from Monopoly

The goal of the game is to reach the sanctuary of the Promised Land.    Ireland.

Upon hearing these lyrics, the player pointed at by the Ralph game character moves their game piece back exactly two (2) squares.

To gain control of the conch during the game, simply yell “BATTLE”.   Ralph and whichever Piggy player calls “BATTLE” line up for a three minute match of Indian leg wrestling.   Winner owns the conch.  Players may yell “BATTLE” as many times per game as they like. 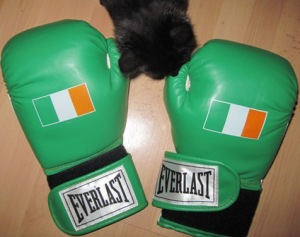 Players choosing to call “BATTLE” or “SUPER MEGA IRISH BATTLE” must stand and speak like the Mr. Chow character in the 2009 movie “The Hangover”.    Right hand in reverse position on back of right hip.   Left hand in the air with index finger extended.   To gain two additional spaces in addition to the spaces earned when rolling the dice, player calling “BATTLE” may prepend the “BATTLE” call by saying “you mess with the wrong guy” in their best Mr. Chow voice.

There are thirty-two die in the game box.   Each player receives four dice and rolls all four of her/his dice when it is their turn.   Each dice looks like the die below.  Thus, each player will always roll a twenty-four.  This makes the strategy far more challenging because you must use maff.   Calculus and such.   Please show all your work. 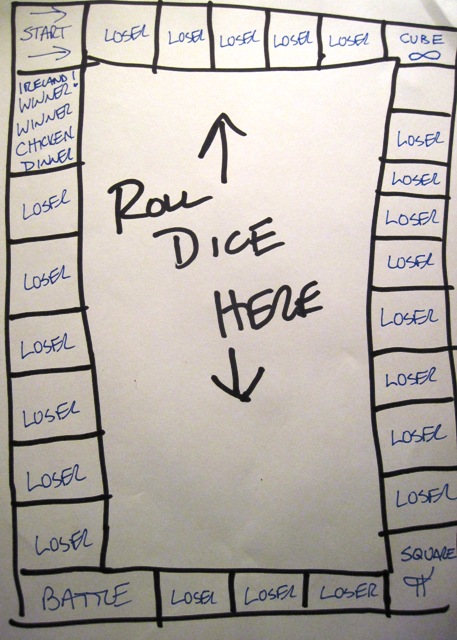 The winner is the first person to either reach the space marked “winner, winner, chicken dinner” on the game board.   Players also have two other chances to win by landing on the two math problem squares and completing the math problems.   Should a player choose to solve the math problems, they must show all their work.

This is zero sum game.   Second place is the first loser.  Each player may play once every eleven years.

United States board game sales:  $1.2B

…………..which is, as most business plan market penetration plans are, completely ludicrous.

I hit them right dead 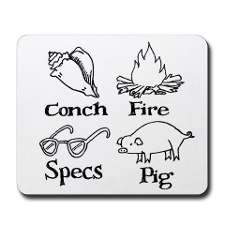 Lord of The Flies Negotiating Lesson

At some point here in the last few years we discussed how negotiating in groups is as effective as fighting a land war in Southeast Asia, with similar success rates.  Negotiating, like most business activities, is best done one on one.  In person.  Have you seen Lord of the Flies?   If so, then you know why negotiating should be done one on one and in person.   If not, please go rent the original and we can all discuss it as a group later on this summer.   In the mean time, please bring me a root beer float made with soft serve ice cream.   80% soft serve ice cream with a splash of root beer. 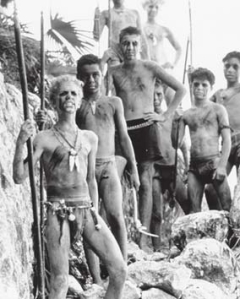 Thanks for visiting and thanks, in advance, for the root beer float.     Yeep yeep.

CAUTION:  The Mind of Mully board game, Negotiation, is not designed for Darwinian Targetted Persons.   If you truly do have a DTP pendant at the end of your chain, please accept this free copy of Chutes and Ladders.